Assault Charges Can Leave a Permanent Mark on Your Record: Let Our Waco Assault Lawyer Help 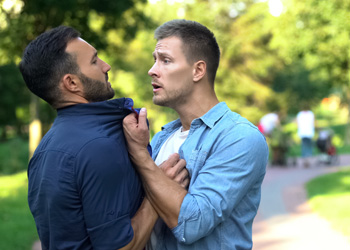 Assault is a crime that no one usually intends to commit. They are often the results of fleeting moments of passion, anger, or desperation. Unfortunately, bad decisions made in the heat of the moment can have serious consequences. Texas is tough on individuals who violate the law, and those accused of assault charges are no exception. That's why, if you've been brought up on these charges, you need an experienced Waco assault lawyer by your side.

Defense For Those Accused of Assault in the Waco Area

There are two main types of assault charges in Texas: simple assault and aggravated assault. Keep reading below to learn the difference between the two.

Were you accused of simple assault when you never even touched anyone?

Many people are surprised to learn that they can be arrested for threatening an individual without ever laying a finger on that person. An assault victim simply needs to feel that you were intending to cause him harm, whether through your words or by actions like shaking your fist. Simple counts fall under the misdemeanor category, and charges will usually be filed because a verbal argument got too heated, or because someone was punched, slapped, kicked, or choked and received a minor injury.

Aggravated assault charges are considered to be a felony. It is the result of a weapon being pulled or an attack causing serious bodily injuries. If you are accused of aggravated assault against a public official, security guard, informant, or witness to a crime, the penalties can be even harsher, which is why having an experienced Waco assault lawyer on your team can make all the difference.

The Law Office of Walter Reaves, P.C. represents individuals accused of all forms of assault, including simple and aggravated. Many times, people will be arrested for assault based on another person merely saying he or she was assaulted. That means law enforcement officers never saw anything happen and they are simply going on the word of someone else. Waco assault lawyer Walter Reaves has handled assault cases for over 35 years and will know exactly how to proceed with your situation.

If you are charged with assault, you need an experienced Waco assault lawyer who knows the legal system like the back of his hand. That lawyer must know what will happen if you are convicted and they must be willing to present you with your options and let you know what to expect.

You will get all of that, and more when you choose to let Waco assault lawyer Walter Reaves represent you. Contact our team online or call 254-296-0020 today for a free consultation.