Is there ever a presumption of guilt? Sometimes you have to prove innocence to be found not guilty!

This is the second post addressing the issues raised by the New York Times and Pro Publica article, Blood Will Tell. In the previous post, I addressed the fact that Joe Bryan was not a typical defendant. He had everything going for him, but he was still convicted. The first lesson was that the same thing could happen to you, or a member of your family. 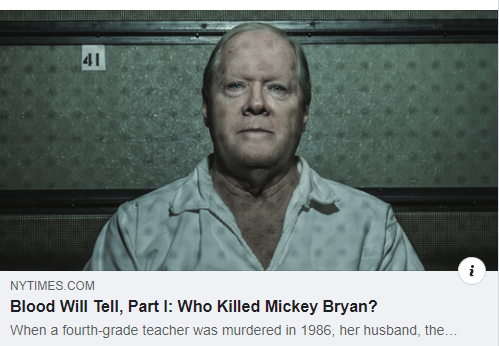 The second lesson is one that not everyone will agree with me on. Those who don’t agree, most likely don't have any experience with the criminal justice system. If you ask any defense lawyer with more than a few years experience they will tell you that there are some cases where the defendant has the burden to prove they are innocent.

Yes, there is the presumption of the innocence. The judge will instruct the jury on that, and the defense lawyers will argue it until they are blue in the face. But the fact is that in some cases, you are presumed guilty unless you can prove someone else committed the crime.

This happens most often in murder cases. You know an offense has been committed because someone is dead. The question is usually who did it. It’s human nature to want an answer; "we don’t know" is not good enough. While it may be enough in other cases, the psychological pressure in murder cases is to solve them. You can sometimes win murder cases by putting forth another suspect. Jurors can accept the fact that they may not be able to choose between alternate suspects. A viable suspect can be enough to create reasonable doubt. Where the choice is "we’re not sure the State has met its burden, but we don’t know who else it could be," a guilty verdict often follows.

If ever there was a case that established reasonable doubt, it was this one. For starters, the timeline was fairly solid; there was a limited amount of time available to drive to Clifton, commit the murder, and return home. The scenario seemed implausible on its face.

The second hurdle was the lack of physical evidence. The crime scene was gruesome, and the assailant would have been covered in blood. Yet, there was no evidence of blood outside the bedroom. Perhaps most important, there was no evidence of blood in the car that would have been used to get back and forth to Austin. A car he would not have had time to clean before he found out his wife had been found dead.

Then there was the flashlight, the discovery of which was nothing short of bizarre. If it was connected to the murder, the jury had to believe that Joe Bryan meticulously planned out the murder, cleaned himself up before leaving the house, yet decided to hold onto a cheap flashlight. And not simply hold onto it, but carefully place it in a box in the trunk of his car.

And then, there was the motive - or the complete lack of one. The State had to concede that they could come up with no motive for the murder. To find Joe Bryan guilty, the jury had to believe the defendant planned out a vicious murder, for apparently no reason.

All of those factors scream reasonable doubt. And if there had been an alternate suspect, it probably would have been an easy decision. Unfortunately, the alternate suspect was developed long after the trial.

So, lesson number two is that the presumption of innocence isn’t always enough to protect you.

If you are interested in learning more about how the criminal justice works - and sometimes doesn't work - get a copy of our book Criminal Injustice - Don't Become Another Victim of the Criminal Justice System. And check back for the next lesson we can learn from this case.