A lot of lawyers love to be recognized - even if they have to pay for it. Businesses were quick to recognize this and started providing websites with lists of top attorneys. The first ones I saw were the 100 best criminal defense attorneys. Others quickly jumped on board and started specializing - the 100 best DWI/DWI attorney, 100 best personal injury attorneys and so on. When you achieve that recognition, you usually get a certificate, and a badge you can display on your website.

Non-lawyers think this means something, and are impressed - which is why lawyers do it. They look at these certificates, and assume someone screened all lawyers and determined these were "the best." Unfortunately, all that it really means is that they were willing to pay the annual fee - usually $225-300 for the designation. In other words, it's a marketing scam.

I've wrote about this before - when I received an offer to be named a top personal injury attorney - even though I haven't been involved in a personal injury case for over 30 years. Since then, I also received a letter congratulating me for being named a top divorce lawyer - and offering the opportunity to be listed in their directory. It's been even longer since I handled one of those. 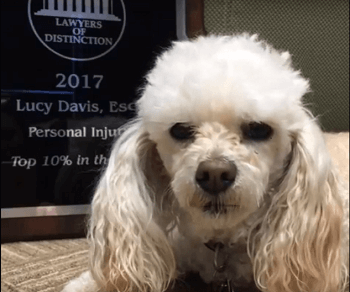 A Seattle firm decided to have some fun with this and submitted their office dog - Lucy - to Lawyers of Distinction. Lucy received her certificate and is now a Lawyer of Distinction. Never mind that she's not a lawyer nor a human. You might think this was pretty clever, but she's not the first. The attorneys at the Davis Group got the idea from a Texas dog, S Roosticus Fisher, who also received an award as a Lawyer of Distinction. You have to wonder how many more there are. Since lawyers have such a bad reputation, maybe someone can get an award for their pet snake.

This would be funny if it were not for the fact that most consumers don't know this. Unless you know better, you will believe your lawyer is excellent and has received this special recognition. You may find out the hard way that they don't deserve it.

There are only 3 valid awards and recognition that I'm aware of. The first is certification, which is administered by the State Bar and requires experience, references, and testing. The other ones are two national services, Avvo and Martindale-Hubbell. Both engage in real screening before conferring their ratings.

I'm proud to have the highest rating from Avvo and Martindale-Hubbell, as well being certified in both Criminal Law and Criminal Appellate Law. So I think I'll save my money, and others can chase these phony "awards."